You are currently on our UK site. Shop on our United States site using US dollars ($).
Home > Our products > Silver Canadian Maple Leaf Monster Box of 500 Coins 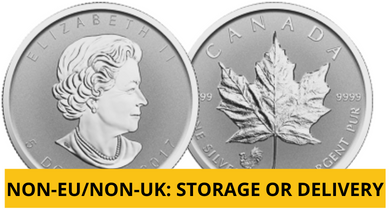 As the world’s first 99.99% pure silver coin, the 1 oz Silver Maple contains one troy ounce of pure silver. Its silver content and authenticity are guaranteed by the Canadian government.

As investor demand for physical silver has increased hugely since 2008, production of the Silver Maple Leaf has risen in accordance. The coin is now one of the best known 1-ounce silver coins in the world.

What Are the Benefits of Owning Silver Maple Monster Box?

Should You Invest in Silver Maple Monster Box?

The Silver Maple Leaf is 99.99% pure silver and so is a practical way to own physical silver. Silver has a low correlation with the prices of most other financial assets, so physical silver ownership via the Maple Leaf also provides portfolio diversification opportunities.

With over 110 million Silver Maple Leaf coins produced since 1988, the coin is known and accepted by dealers around the world, making the secondary buying and selling market highly liquid due to the large trading volumes.

New Silver Maple Leaf bullion coins issued by the Royal Canadian Mint are distributed in uncirculated condition and can be securely stored in their original tube and box packaging in which they are issued.

According to the Silver Institute, the majority of Silver Maple Leaf coins have been exported to the US and Europe, with Germany being a major market. Demand from Asia is believed to have grown substantially in the last few years.

For larger amounts or those seeking added liquidity, investors can buy Silver Maple Monster boxes and own them in allocated and segregated storage in GoldCore Secure Storage.

GoldCore offers U.S. and Canadian clients fully insured secure storage facilities in the safest vaults in the safest jurisdictions in the world – in Delaware, Zurich, London, Hong Kong and Singapore.