You are currently on our UK site. Shop on our United States site using US dollars ($).
Home > Our products > Silver American Eagle Tube - 20 coins 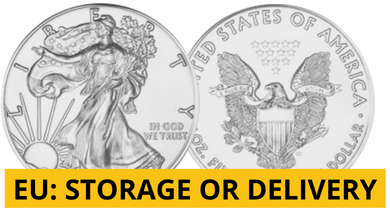 The Silver Eagle is minted by The U.S. Mint. Each coin contains 1 oz of .999 fine silver that is guaranteed by United States legislation. Therefore, the coin is backed by The U.S. government.

Silver Eagles are a simple way to add a tangible silver asset to an investment portfolio and silver is proven to have a low correlation with most traditional investment asset classes, thereby providing portfolio diversification benefits.

GoldCore has been offering silver bullion coins including Silver Eagles for sale to UK buyers since our inception in 2003.

What are the Benefits of Owning Silver American Eagle Coins?

Buying American Silver Eagles is an easy and simple process. You can buy them online and have them delivered by post or held in Storage. To purchase use the BUY button or you can call our office to place your order over the phone.

We sell American Eagle Silver Coins and all major bullion bar and coin products and you can pay by bank wire, credit card or debit card.

We make a market in Eagle coins, gold and silver, and offer fully insured delivery to our British clients throughout the UK from our depository partner vaults in London and Zurich.

Insured delivery of American Silver Eagles, including monster boxes, to homes or offices is also popular and many clients do both - take delivery of some Eagles and own the rest in Secure Storage.

What is the Price of a Silver American Eagle Coin ?

The price of a Silver Eagle (1 oz) is shown in the upper right section of this page.

The price of a 1 oz American Silver Eagle is calculated using three components:

In order to determine the price of a Silver Eagle, simply multiply the spot price of silver by the number of troy ounces of silver in the coin (1 ounce) and then add or subtract the current premium for the coin or coins. GoldCore’s premiums on Eagles are competitive at between 18% and 24%.

The value of a Silver Eagle is that they are highly popular and an internationally liquid, portable store of value and vital form of financial insurance. They are one of the best ways for silver buyers and investors to own physical silver. They act as a hedge and protect British silver buyers from domestic and international financial and monetary risks.

How Much Silver is in a Silver American Eagle Coin?

The American Eagle has a diameter of 40.6mm, a thickness of 2.98mm and its edges have a receded texture.

The Silver Eagle contains 1 troy ounce of .999 fine silver and is easy for investors to value since, excluding premiums, its price roughly tracks the world silver price.

What is the History of the American Silver Eagle Coin?

The silver coins are beautiful. The obverse features Adolph A. Weinman’s design showing Lady Liberty draped in an American flag, walking gracefully as the sun rises over a ridge.

The reverse shows a heraldic American eagle below 13 small stars, each representing one of the original colonies.

Video shows American Bullion coins being made in The West Point Mint.

The coin is highly stylised and known for its high quality finish, pure silver content and historical design. The Eagle has only ever been produced in a 1 oz form. Unlike other well-known bullion coins, smaller fractional denomination Silver Eagles such as a ½ oz version were never created.

American Silver Eagle Coins are produced at The West Point Mint in New York, and have a ‘W’ mark underneath the date. You can purchase American Eagle Silver Bullion Coins (1oz) and monster boxes of American Eagles from GoldCore.

Because they are produced by the United States Mint, each coin’s metal content, purity, and weight is guaranteed by the U.S. Government.

American Silver Eagles are mass produced to help retail investors purchase silver bullion with ease and confidence. They are widely traded on the global silver markets and are therefore competitively priced and highly liquid.

The 1 ounce denomination makes the coin easy to transport and carry and this divisibility may also be useful if a part of a silver holding needs to be sold in the future.

Note: Minimum order for delivery is one tube.

Storing and Vaulting your American Eagle Silver Coins with GoldCore

For larger amounts or those seeking added liquidity, investors can buy American Eagle Silver Bullion Coin “monster boxes” and own them in allocated and segregated storage in GoldCore Secure Storage.

New American Eagle Silver Bullion Coins issued by The United States Mint are distributed in Brilliant Uncirculated condition and can be securely stored in their original tube and box packaging in which they are issued.