You are currently on our UK site. Shop on our United States site using US dollars ($).
Home > Our products > Gold Australian Kangaroo 1 Ounce 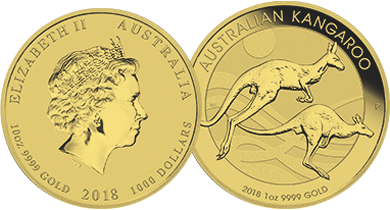 What is an Australian Kangaroo Gold Coin?

The Australian Kangaroo Gold and silver bullion coins were first minted by the Perth Mint of Western Australia in 1987. The Gold Kangaroo or Nugget as it was first known is a 99.99% pure gold bullion coin. It has become a favorite gold bullion coin among both collectors and investors in the UK, throughout the Commonwealth, and internationally.

What are the Benefits of the Gold Australian Kangaroo Coins?

Buying Kangaroo Gold coins is an easy and simple process. You can buy them online for Delivery or Storage using the BUY button or you can call our office to place your order over the phone.

We sell Gold Kangaroos and all major bullion coin and bar bullion formats and you can pay by bank wire, credit card or debit card.

We make a market in Kangaroos and offer fully insured delivery to our British clients throughout the UK - in England, Wales, Scotland and Northern Ireland - from our depository partner vaults in London and Zurich.

Insured delivery of Gold Australian Kangaroo Coins, including monster boxes, to homes or offices is also popular and many clients do both - take delivery of some Gold Kangaroos and own the rest in Secure Storage.

Many of our UK clients opt to store their Gold Kangaroos in fully insured, offshore Secure Storage jurisdictions. We specialise in offering British and international clients access to allocated and segregated bullion storage in secure non bank vault partners in safer jurisdictions in the world such as Zurich, Hong Kong and Singapore.

What is the price of an Australian Kangaroo Gold Coin?

The price of Australian 1 oz gold kangaroo coins is shown in the upper right section of this page. The price of a 1 oz Gold Kangaroo is calculated using three components:

In order to determine the price of Australian Kangaroo Gold, simply multiply the spot price of gold by the number of gold troy ounce in the coin (1 ounce) and then add or subtract the current premium for the coin or coins. GoldCore’s premiums on Kangaroos are competitive at between 3.5% and 5%.

The value of a Gold Kangaroo is that they are a competitively priced, highly popular, and portable store of value that is very liquid. They are a valuable, potentially invaluable form of financial insurance. They are one of the best ways for gold buyers and investors to own physical gold. They act as a hedge and protect British gold buyers from domestic and international financial and monetary risks.

The first release featured an image of the world’s largest gold nugget, the 2,284 oz ‘Welcome Stranger’ nugget, which was found in Victoria in 1869. For the next three years, other significant natural nuggets were showcased on this unique program.

Since 1990, the Australian Nugget has carried different portraits of the uniquely Australian animal – the kangaroo – and as a result, it has become known as the Australian Kangaroo.

The Australian Kangaroo Gold Coins coins now feature a new design of Australia’s most famous marsupial – the kangaroo – each year. The only exception is the large 1 kilo size release, which maintains a classic kangaroo design created by Dr Stuart Devlin, AO, CMG, goldsmith and jeweller to Her Majesty Queen Elizabeth II. This and the reasonably limited mintage adds a degree of collectibility to Kangaroo Gold Coins.

Australian Kangaroo Gold coins are an attractive alternative to other bullion products. The range of bullion coins issued by The Perth Mint offers investors and collectors a range of features that combine to add value to their precious metals, making each series of these beautiful gold coins a firm favourite.

Whether you decide to take possession of your precious metals or have them stored safely on your behalf with a secure third party, Gold Kangaroos are an excellent bullion coin to own.

Australian Gold Kangaroos or Nuggets typically command premiums of between 4% and 5% with GoldCore who offer some of the most competitive premiums for both delivery in the UK and for secure international storage.